CDRS Back in Action at Transport Compleet 2022 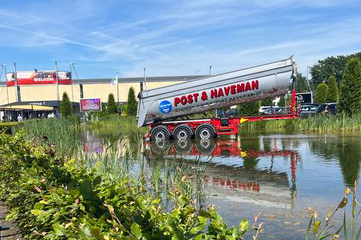 Last week, Celerity DRS team members Bart Ezendam and Andre Gerken travelled to Hardenberg in the Netherlands for the 2022 Transport Compleet Show – a major event in the BeNeLux transport industry calendar, and a tradeshow that provides a platform for market leaders in the commercial vehicle, trailers and chassis parts sector to demonstrate their latest innovations.

We asked CDRS General Manager, Bart Ezendam to provide a brief overview of this year’s show.

“After almost two and a half years of waiting due to the pandemic, the Transport Compleet show was finally able to go ahead. Many exhibitors and more importantly, visitors, were travelling from far and wide to visit the eagerly awaited fair. Along with Dutch nationals, there were a lot of Belgians in attendance. As well as our own German hero, Andre Gerken, many German commercial fleet owners had also made the journey and were keen to find out more about new innovations and trends within the industry.

Following an agreement made three years ago, the CDRS team joined forces with one of our partners, Trailer Products Europe (TPE). This allowed us to share our knowledge (and stand costs!) with show attendees.

TPE is a key partner for CDRS and they operate as a reseller for the PSI Automatic Tyre Inflation System (ATIS), primarily focussing on aftermarket installation i.e. retrofit. This relationship forms part of a wider strategy for Celerity DRS, which in the first instance offers the PSI System via the axle OEMs, and then we go out to the wider market and offer retrofit installations – this allows us to cover every angle and offer the widest availability on the PSI ATIS.

The show itself was a real success for myself and Andre – the stand location was chosen strategically by TPE; situated in a corridor where visitors had to pass through in order to access the other two event halls. There was no way to escape us!

On the stand we had an axle system with a cut-open control box. This is always a really good talking point and creates a lot of interest from show attendees. As well as their own axle display, TPE also brought along a glass display case which contained various ATIS parts and a range of OEM hubcaps – this was incredibly helpful in discussions with potential customers and something that we will definitely consider taking along to future shows.

To summarise, we saw a lot, learned a lot and potentially we even sold a lot! There were at least six or seven Automatic Tyre Inflation Systems on display at the fair:

Linkedin
Twitter
Facebook
Instagram
This website uses cookies We use cookies to personalise content and ads, to provide social media features and to analyse traffic. We also share information about your use of our site with our social media, advertising and analytics partners who may combine it with other information that you have provided to them or that they have collected from your use of their service. To opt-in, select ok, otherwise select settings set to opt-out preference Find out more.